The Particle Data Group (PDG) is an international collaboration that provides a comprehensive summary of Particle Physics and related areas of Cosmology: the Review of Particle Physics. The PDG collaboration currently (as of the 2021 web update) has 262 authors and 5 technical associates from 187 institutions in 27 countries. It is led by a coordination team based mostly at Lawrence Berkeley National Laboratory (LBNL), which has served as PDG's headquarters since inception. In fall 2017, the coordination team was expanded to include a person supported by INFN. The organization of the PDG collaboration is shown in the figure below. 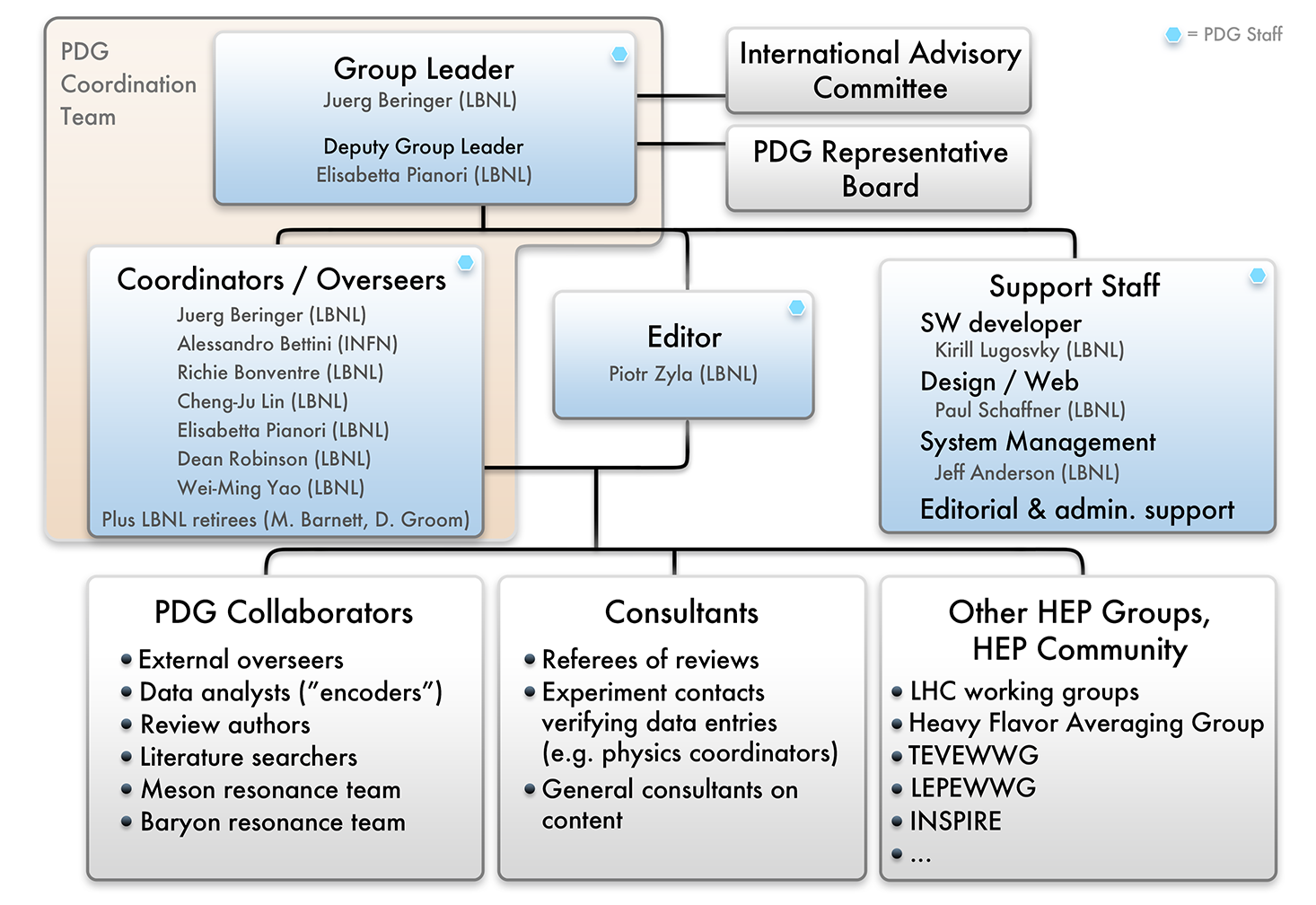 The Review of Particle Physics is updated yearly and published every two years in a HEP journal. It includes a compilation and evaluation of measurements of the properties of known elementary particles and summarizes searches for hypothetical new particles. For the 2020 edition, 3,324 new measurements from 878 papers were added, in addition to 41,371 measurements from 11,322 papers that first appeared in previous editions. 120 individual review articles discuss topics such as as Higgs bosons, supersymmetry, Big Bang nucleosynthesis, probability, statistics, accelerators and detectors. In addition to the 2,000-page journal publication, the Review of Particle Physics is available as In the over 60 years since PDG started with the publication of the first wallet cards (W.H. Barkas and A.H. Rosenfeld, UCRL-8030), the Review of Particle Physics has become the most-cited publication in particle physics. A summary of the early history of PDG can be found in Art Rosenfeld's 1975 article. A feature article in the November 2017 issue of the CERN Courier provides a more recent overview. The publication of the Review of Particle Physics is supported by the Office of High Energy Physics of the U.S. Department of Energy (DOE); by the European Laboratory for Particle Physics (CERN); by an implementing arrangement between the governments of Japan (MEXT: Ministry of Education, Culture, Sports, Science and Technology) and the United States (DOE) on cooperative research and development; by the Italian National Institute of Nuclear Physics (INFN), and by the Physical Society of Japan (JPS). Individual collaborators receive support for their PDG activities from their respective funding agencies.